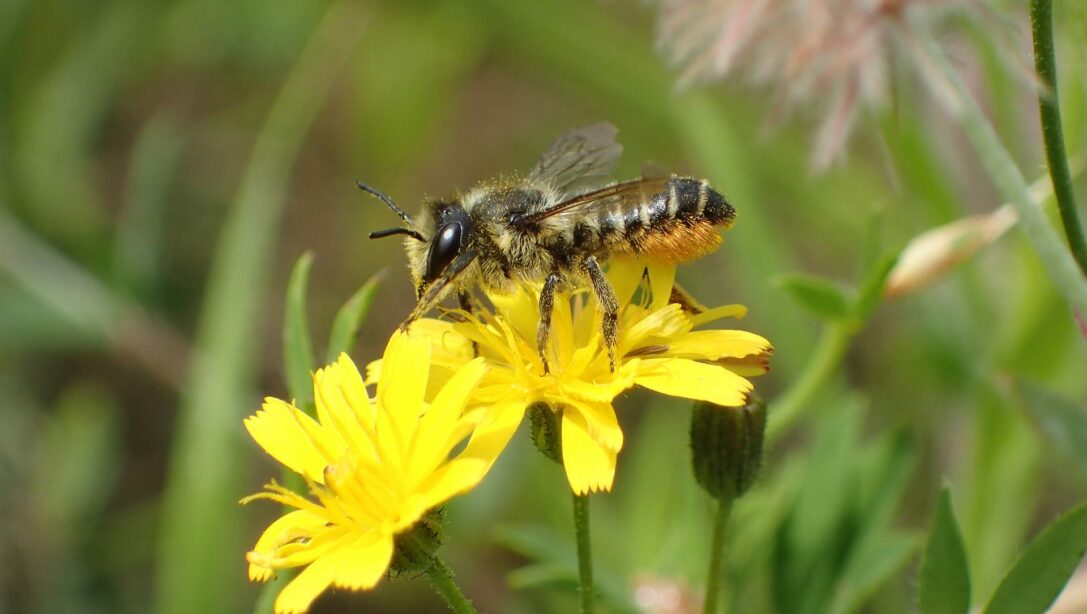 We are taught from childhood that bees produce honey and live in hives, so it is perhaps no surprise that the best-known bees in the UK are those that live in colonies – our honey and bumble bees. But, over 90% of UK bees, covering some 250 species, are actually solitary. With help from the experts at Wildlife World, we offer a brief guide to solitary bees.

What Are Solitary Bees?

Solitary is the term for the large number of bee species that do not work together as a group. Solitary bees also do not produce honey and generally do not have a queen bee. They are, however, a vital part of the ecosystem as many of the species are prolific pollinators, carrying out the majority of pollination in Britain. Better still, they have an extremely weak or ineffective sting – even more reason to welcome them into your garden.

Many solitary bees are quite small in size and are not always in the infamous black and yellow colours usually attributed to bees. This means they can easily be mistaken for another insect. If you spot unknown insect visitors in the garden, it is always worth trying to identify them from a safe distance first to determine if they are friend or foe!

In the UK, the majority of solitary bees are species of Mining Bee (Andrena genus). As the name suggests, mining bees create holes in the ground to nest in – you may even be fortunate to spot a collection of these holes in your lawns and borders. 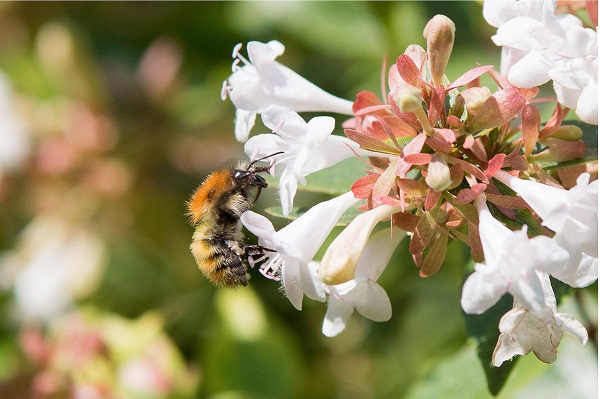 Tawny mining bees (Andrea fulva) are one of the most commonly spotted solitary bee species, seen from early spring through to the start of summer. They can be clearly distinguished by their vibrant russet-orange colour giving rise to the name.

There are only a handful of flower bee species (Anthophora species) found in the UK. These are all larger than mining bees, although they also nest in the soil, as well as in high-up nesting sites. 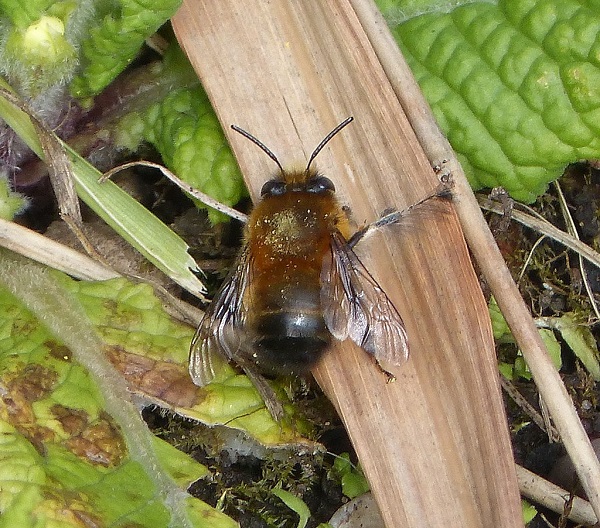 One of the first solitary bee species to emerge in spring and one of the most recognisable is the hairy footed flower bees (Anthophora plumipes). It can be spotted hovering around plants in our gardens from March into early summer, using its extremely long tongue to probe plants for nectar. Females are black all over with yellow legs while males are a browny-yellow shade.

Sweat bees (Halictus and Lasioglossum species) are so-called because – more often in countries with a tropical climate than in the UK – they are known to be attracted to the perspiration on human skin. There are around 60 different species across the UK and some, in defiance of the ‘solitary bee’ tag, do create semi-communal nest tunnels. 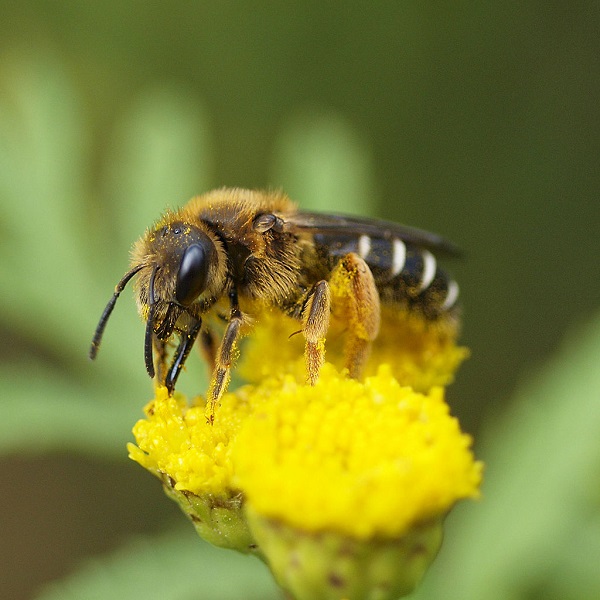 The orange legged furrow bee (Halictus rubicundus) is one of the largest British sweet bees and distinctive thanks to the white bands across the abdomen and yellow-orange legs. It is found throughout Britain, often making its nest in areas of warm, sloping ground. The females emerge from hibernation around April each year.

Mason bees (Osmia species) include some of the most easily recognisable species of solitary bee. Bees from this species create nests in a range of natural cavities such as those found in walls, chalk banks and in hollow plant stems among other things and are some of the prime species that will use bee hotels, whether you make one yourself or buy a ready made bee habitat. 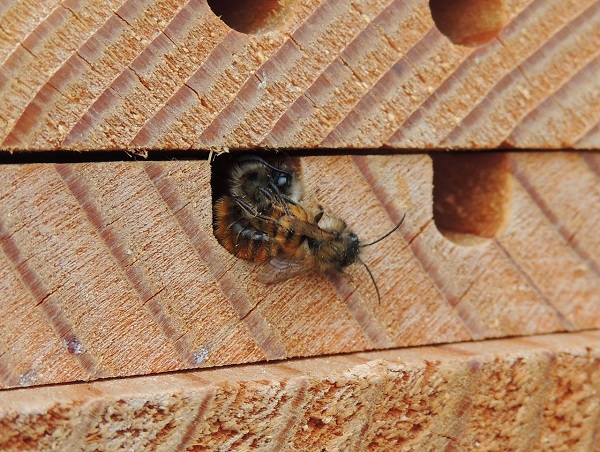 This common species of mason bee can be found throughout Britain, spotted from late March to early summer. It can be easily distinguished by the two horn-like features on the face along with its bright orange tufted coat.

If you’ve spotted a bee in your garden and would like help identifying it, the UK Bees, Wasps and Ants Facebook Group is extremely helpful and knowledgeable.

The diverse species of solitary bee nest in a wide variety of locations, from nests in the ground to ones that nest at height in holes and seal their nests with mud, chewed leaves or a saliva-like substance. It is these aerial nesters who are most likely to use artificial bee homes positioned in the garden.

As the temperature gradually increases, solitary bees emerge from their winter torpor – species dependent, this is often in April and May. The females are the pollinators, the male role is solely for breeding. The males are the first to emerge in spring, waiting near the nests for the females and fighting to determine the one survivor.

Once the females emerge, the winning male mates with them and dies. As the females go on to lay their eggs in nesting holes, they mix in some pollen and nectar, which acts as a first food source for the pupating larvae, giving it energy to break through the following spring.

The majority of solitary bees will collect pollen from a wide range of pollen-rich garden plants. It is invaluable to have a garden full of plants loved by these pollinators, particular in spring when the majority are active, e.g. Alliums, astrantia, bluebells, deutzia, erysimum, lavender, myositis (forget-me-nots), pulmonaria and rhododendrons. Find more in our guide to the best plants for bees.

Some solitary bee species will only collect pollen from a very limited range of plants, for example only from one genus. It is clear to see, then, how any loss of solitary bee populations could have terrible repercussions on some of our crops.

Extra support for solitary bees can come in the form of bee bars, barrels and hives. Position these in sunny, sheltered spots in the garden to provide a safe home and nesting spot. 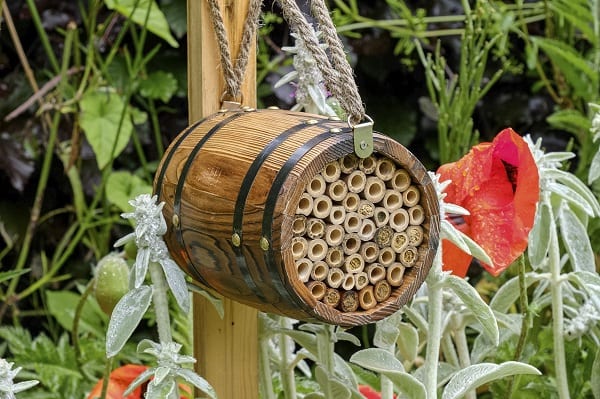 Garden Wildlife in May