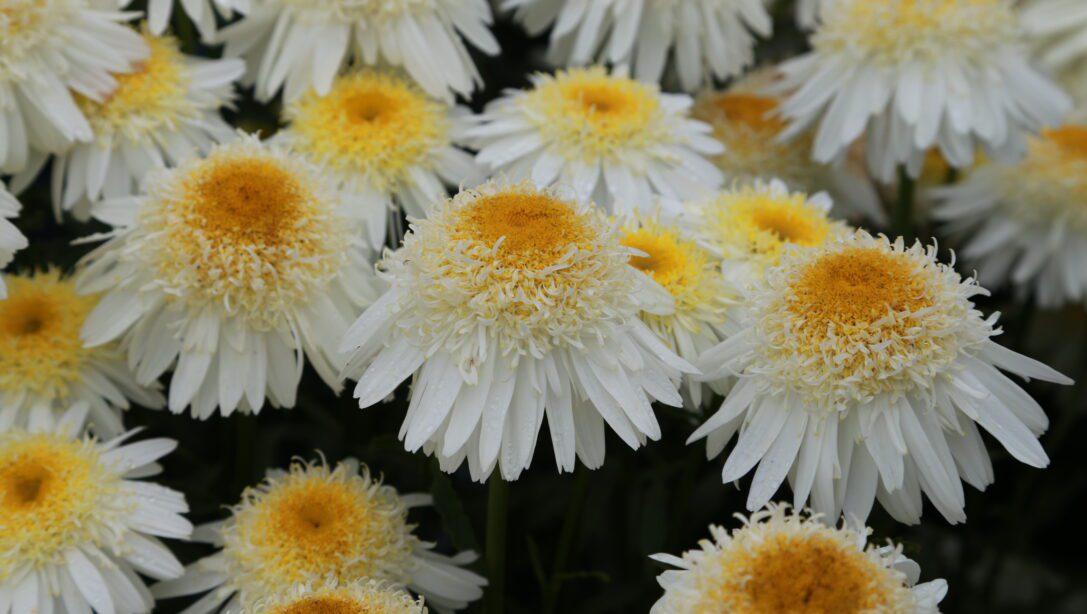 Leucanthemums have had a recent resurgence of popularity, which is likely thanks to exciting new varieties becoming available. Leucanthemum x superbum, also known as Shasta Daisy, is a hybrid version that is by no means new, having first been developed in the 1890s. But some new fantastic varieties are bringing great value to the garden, developed to be more compact and to offer repeat flowering.

The big, bright flowers of leucanthemums are produced all summer in white, cream and yellow shades. Their flowers are loved by pollinators and are also a popular choice as a cut flower. Easy to grow, simply position in a sunny spot and deadhead to enjoy a continuous display of blooms.

The Leucanthemum x superbum ‘Real’ Collection is one to look out for. Flowers in this range are extremely floriferous and robust, bringing unique flower form to the summer and early autumn garden.

Leucanthemum x superbum ‘Sunbeam’ is true to its name, offering a profusion of large yellow flowers with deeper golden-yellow centres all through summer. Easy to maintain, simply deadhead for a continuous display of smile-inducing flowers.

Leucanthemum x superbum ‘Real Neat’ is a hardy, clump-forming perennial with dark green foliage. It produces large blooms in summer through to autumn that have rows of horizontal white petals, which gradually reflex to expose an ever-enlarging frilly, yellow domed centre. It is ideal for bringing colour and interest to beds and borders.

Leucanthemum x superbum ‘Real Dream’ is a fantastic, compact perennial. All through the summer, the upright stems offer a profusion of large flowers with layers of semi-double, pale yellow petals and a golden centre. These will gradually turn closer to white in colour.

Leucanthemums are robust and generally disease-free perennials that will give months of beautiful flowers with just a little care and reliably return year after year.

Plant leucanthemum in a spot in full sunshine for best flowering, in moist but well-drained soil. Make sure the top of the root ball is level with the surface of the soil when placed in the hole. Water thoroughly.

Deadhead regularly to encourage repeat flowering. Cut back stems to the base once flowering has finished in autumn. They will then start to emerge again in early to mid spring.

Plant together in the border with other summer-flowering perennials that offer a contrast of height and form, such as verbena, penstemons and nepeta.

The common name for Leucanthemum x superbum, Shasta Daisy, is in reference to the volcano Mount Shasta in California. The petals on the original flower variety were thought to be the colour of the snow on its peak.

While they look similar to Leucanthemum vulgare, the commonly known ox-eye daisy found in lawns, the flowers of Leucanthemum x superbum are significantly bigger

If You Liked This You May Also Enjoy

How To Care For New Outdoor Plants

Encouraging Wildlife In Your Garden With Wildflowers

Your Herbaceous Border Through The Seasons