The Allotment Diaries | No 4 Strawberries & Schemes 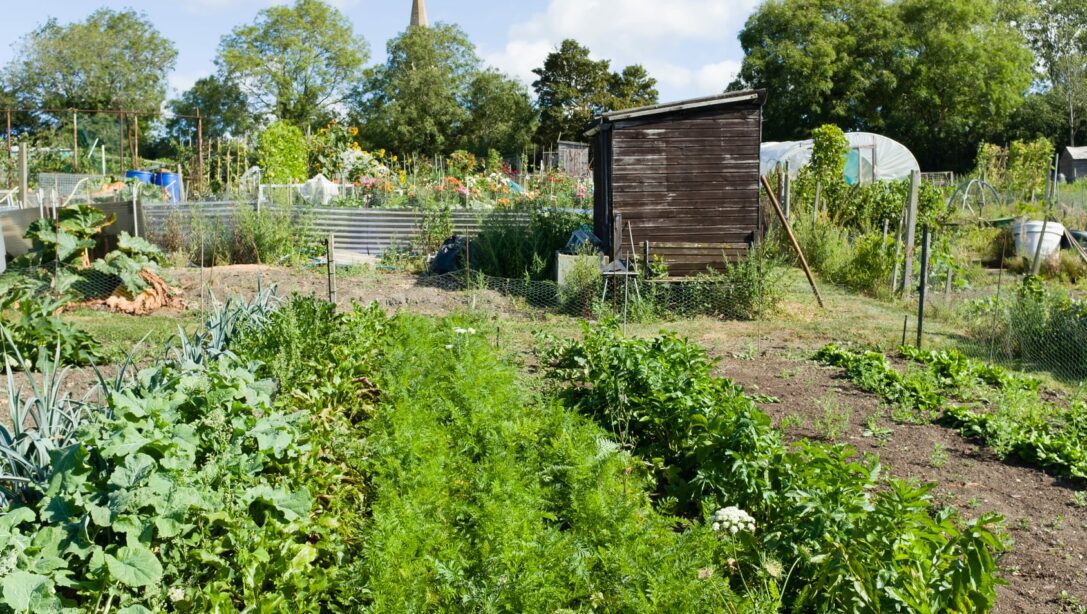 Steve Harrison, Plant Area Manager at Hillier Garden Centre Newbury, is an expert in growing and caring for plants. But this year, a kindly neighbour has given him a piece of allotment and for the first time he is turning his hands to allotmenteering. In the fourth, Steve enjoys success with his strawberries and makes plans for continued crops through the season.

“June has been one of the most exciting months on the plot yet. There has been so much going on and adjustments to make already for next year, I almost forgot to take time to put finger to keyboard.”

“An unexpected joy this month has been the strawberry patch. This success starts from a conversation in early spring, when my neighbour and I chatted about how to increase the yield of strawberries for the coming year and at the same time reduce the maintenance.

“We took out all the unproductive clumps and renewed them with a selection of small plants. We then dug up the plants from the previous years, replanted them and spaced them out in rows with a greater distance between them. By having a mix of large and smaller clumps in the same row, the aim was to produce better cropping plants this year and in the following few years.

“As we are using a ‘no dig’ method, we covered between the rows of strawberry plants with cardboard. This is a useful trick to reduce weed growth. The plants were given a generous feed with vegetable pellets and, a month later, we covered everything with straw. Straw is helpful to protect the plants from future frosts and to help protect the fruits once produced.

Protecting strawberry crops with a layer of straw

“When the strawberries started to produce fruit this month, I was so impressed by our joint efforts. I had never seen strawberries like them! There was an abundance of them for a good length of time and some were quite a size. Our mix of varieties turned out to be a very good idea, giving a longer cropping time.

“I hadn’t appreciated before the joy of picking strawberries for the family or having some friends enjoying the fresh fruits of the plot. I will most certainly put as much effort into them next year!”

A bumper harvest of strawberries

“June has definitely been a month for watering. I have been watering more or less alternate days. I have also been feeding my crops weekly with a liquid food, as well as adding a liberal spreading of pelleted food before planting new crops.

“From feeding my plants to stopping the slugs eating everything. I have continued to top up the sunken cider I have been using – it is proving a helpful slug deterrent. I intended to also place coffee grinds around the base of any plants that are loved by slugs – the idea is that the grounds  stick to the slime trail of the slugs, making it harder for them to crawl, so they just keep clear of the plants. The only problem is these need to be re-applied after rain. It seemed easier just to keep going with the cider approach!

“My neighbour had helped me out with some of my previously slug-decimated plants by covering my broccoli, lettuce and spring onions with a mesh. To lift this mesh from the plants, I used an old piece of hosepipe with some canes stuck into the hose pipe ends to secure them into the soil. This really worked … until the day I forgot to top up the cider and the local slugs switched straight back to my lettuces, bar one clump! I proudly cropped this lettuce as my first (and only) of the season.  It tasted rather nice – I can see why the slugs were enjoying it so much.”

Harvesting lettuce. Only one, but still delicious.

“It has been exciting to see how different crops are coming along, depending on their growing conditions and how the weather this year has affected them. The red spring onions have thrived thanks to the fleece covering they had earlier in the year and thankfully have survived the slugs and birds too. They are more than three weeks ahead of those planted in the raised beds without protection.

“Another enjoyable benefit of growing your own is the range of varieties you can put on your plate, compared to the often-limited shop-bought varieties. They are so good I’ve almost eaten them all! I’m now about ready to move on to the later producing crops that were not protected – this is a good way to stagger your crops for a longer eating period.

“In the raised bed I made for the squashes and courgettes, there is still quite a few of the catch crops (quick-growing crops – in theory) still around as they are growing but nowhere as quick as I’d hoped, partly because of the cold spring. Some, like the carrots, just didn’t grow at all. The rocket on the other hand grew so well it bolted, was chomped and went to seed!  We did get to enjoy some rocket leaves, but think would have better luck later in the season – I might have a second go with the rocket.

A medley of crops ready for eating

“In the few spaces in the raised beds, I planted the squash by the squash cage, ready for them to climb up as they grow. This should allow me the room for the space-loving and ever-hungry courgettes.

“With my over-optimistic growing of squash, I acquired some spare space adjoining the sweetcorn and beans to plant the remaining courgettes. I over-bought courgettes, thinking they may be chomped by my silver-trailed plot companions. This led to another fun part of growing veg – I gifted a couple to friends and a traded one for a mini cucumber, which is now loving its spot sunning itself on the patio.”

“I’ve almost forgotten to update on the long-running saga of the (almost) has beans. They are plucky beans – I was informed that they thrive in the warmth so should be doing well. The cider pots were doing the job keeping slugs at bay and the birds were also now enjoying the slugs. But it seemed like the birds wanted something green to complete their meal, so continued to eat my bean leaves – both the green and purple. So, the beans still look in a sorry state, but the birds are contented at least. Which is a good thing at times. The beans are trying to flower and produce a handful of beans – I might get some wonky veg after all.

“For next time, I’m starting to wonder if it’s getting a bit late to keep planting after cropping. I’m going to give it a try I think – good luck with your second planting if time allows.”