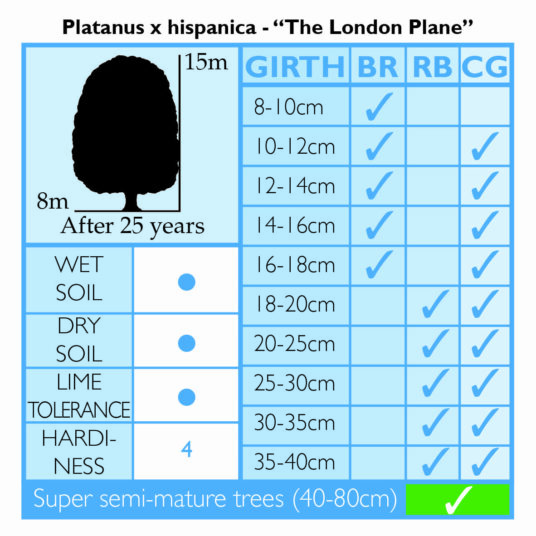 A hybrid that was originally found growing between a Platanus orientalis and Platanus occidentalis. This was discovered by John Tradescant at the Vauxhall Gardens in London during the 1600s, which has since become one of the most planted trees in urban streets all over Europe.

It is renowned for absorbing small carbon particles of urban pollution. It was planted extensively for this reason during the Victorian industrial revolution to combat the smog-laden impurities. It is resilient to ground compaction and hard standing surfaces, establishing in condensed root spaces.

Its leaves are large with 5 lobes similar to the Maple. When young they have small fibrous hairs on the underside. These are shed as the leaves mature through the summer, which can be an irritant to asthma sufferers. Because of the hardy nature of the tee, the leaves also take a long time to break down which will require autumn maintenance programmes to remove. It is popular to heavily prune the trees back to its trunk as a standing pollard. This minimises the canopy of leaves, whilst creating a pleasant avenue of lollipop forms.

Its characterful bark sheds whilst taking in pollution. These flake in distinct patches that almost resemble camouflage. An avenue planting that has been freshly pollarded appears like army soldiers standing to attention. Left to grow the canopy forms a large, impressive crown that allows its use as a singular feature tree within the landscape.

Hillier develop and grow mature pre-pollard Plane trees. These have a 4m, 5m and 6m clear stems, with a crown pollard formed close to the trunk. These are specifically designed for high streets with multi-storey infrastructure that require clearance of visibility.