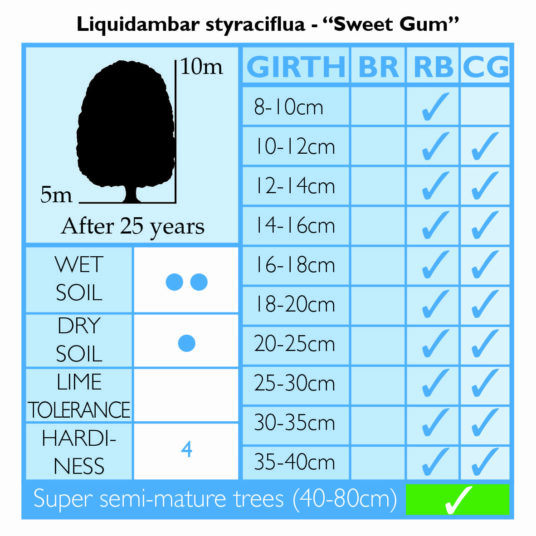 With perhaps the finest autumn colour of all trees, this American Sweetgum has become a popular choice for avenues. Native to the humid swampy regions of America, where the Spanish herbalist Francisco Hernandez first came across it. He provided the botanical name due to its aromatic gum which he described as Liquidamber. It was the famous British plant collector John Bannister who first introduced it to England in 1681.

This large tree is quite narrow and pyramidal whilst youthful. As it establishes and begins to mature, its branches reach out wider from its strongly upright, central leader. The fissured corky bark attaches and extends along the branches know as cork wings. These grooves appear like scales, giving the name Alligator-wood. In heavy rainfalls during the winter is interesting to watch the water cascade and run through these tunnelled fissures.

In spring the leaves open a vivid healthy green. They are an interesting star shape with usually 5 points that are deeply lobed. These are alternate rather than opposite like the Acer, and when crushed they release a resinous tannin which is pleasantly fragrant.

As summer closes, the green leaf veins become a blood shaded skeleton within. The leaf blade then deepens and becomes the most beautiful display of crimson reds, marmalade orange and amber golds. On favourably moist sites in full sun, the colours intensify further into neon purple and fluorescent bubble gum reds.

Globed fruit, commonly known as burr balls grow fresh green during the summer. These spikey balls darken in the autumn and can remain on the tree throughout winter. The ones which fall and settle under the canopy have been nicknamed gum sticker balls, which should be considered when designing.