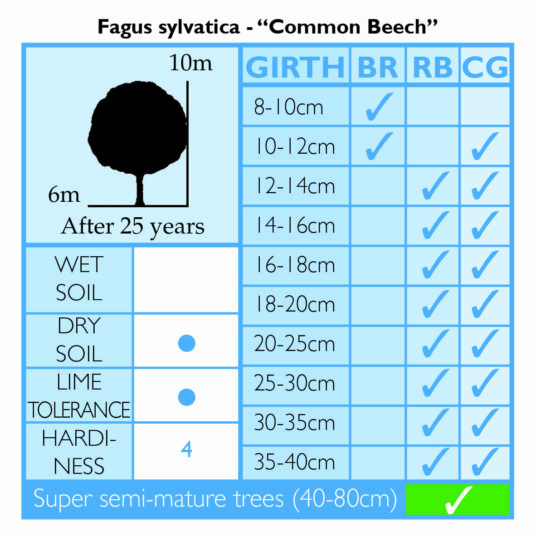 The mighty Beech, native to southern England and one of the most imperial of our trees. With a royal stately form, it can reach mature heights of 35m with a long, far-reaching canopy. Its shallow roots prefer well-drained soil and will not accommodate other plantings beneath its canopy. Preferring a temperate climate, it doesn’t fare well to built-up areas with hard standing surfaces which reflect and retain heat.

The bark shines silvery steel which is smooth and unblemished. This extends along its stable branches giving a majestic, noble appearance to its canopy. When spring arrives, the long cigar-shaped buds unfold lemon-green leaves which brighten to a vibrant shade of lime. They have deep veins which appear rigid and crinkled. As summer fades these mature into molten browns and leathery yellows which crinkle and dry as they shut down. Throughout the winter the scrunched brown leaves remain on the branches, providing interesting screening. The leaves tend to overlap, allowing very little light and rain to reach the ground beneath.

Its fruit is formed as nuts, which are known as Beech Masts. The Masts are the nuts themselves, which every 4-5 years the Beech has a Mast Year. This is when the beech produces a copious number of nuts that can completely cover forest floors. These Mast years of providing food coincide with the Oak trees, which are exceptionally valuable to wildlife in its area.

A muscular tree when planted as a solitary specimen, and will grow with a wide crown that hangs down, sometimes reaching the ground. Also ideal for avenue planting, where the Beech politely retains from stepping on its neighbour’s toes, growing upright with a strong central canopy.