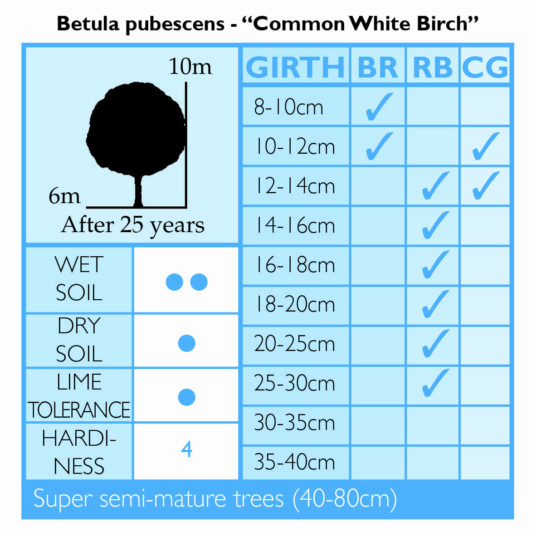 The birch tree family is far-reaching with relatives all over the globe. Here in the UK, we have two siblings which are native to our lands. The sister Betula pendula, and her brother Betula pubescens.

Like all siblings, the younger brother Downy looks similar to his sister, but it has a slight touch of masculinity to its appearance. Its bark is a little darker than its sisters, with more obvious horizontal grooves. While the silver birch has a distinct feminine canopy that is elegant and pendula, the Downy brother has a more upright, ascending canopy. Its leaves are more rounded, with “Downy” white hairs which grow on the underside of the leaf and the stalk, hence its common name.

The Downy is also a little tougher and more suited to cold wet soils, rather than its sister’s preference for dry conditions.

Both brother and sister remain loyal and extremely invaluable to our lands, supporting over 300 different species of insects and birds. In fact, it was the combined efforts of these siblings that helped pioneer the UK after the last Ice Age.