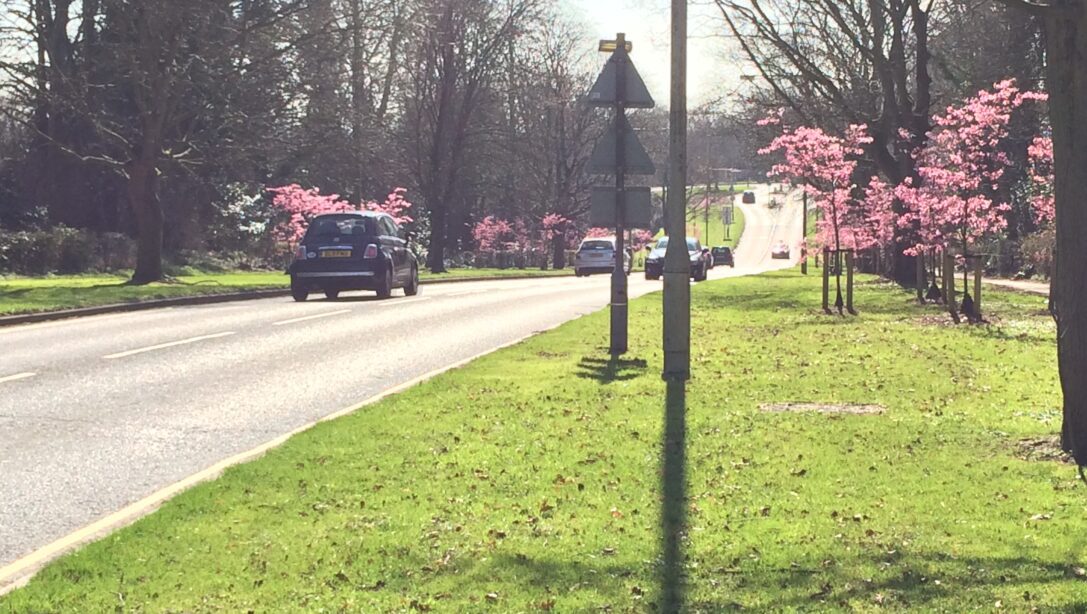 Requirement: In excess of 300 semi-mature trees, to be supplied over a period of many years

Welwyn Garden City, founded by Sir Ebenezer Howard in the 1920s, is the UK’s second-ever ‘garden city’, designed to blend together city and nature. As such, it contains a number of beautiful vistas where trees are a focal point of the view.

With many of the planting schemes now several decades old, Welwyn Hatfield Borough Council (Welwyn HBC) put in place a long-term strategic plan to renew a number of street tree schemes across the town. The main client objectives were – and remain to present day – to respect the original layout and species choice of the trees, as selected over years since the town began. Practically, this means living with declining schemes until they reach the point where the overall effect is compromised and the last trees are felled and the whole scheme, or avenue, is replaced. Whether a road has reached that point is determined by tree officers on a year-by-year basis. 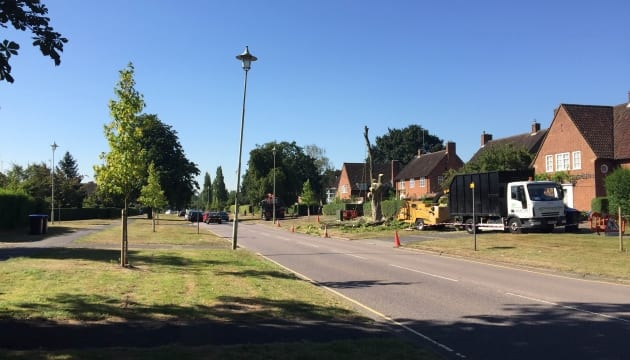 A selection of the key tree varieties chosen for this project included:

Prunus ‘Kursar’
An introduction by Captain Collingwood Ingram, who was the leading western authority on Japanese cherries. This variety had historical significance to the city, as one of his first introductions that adorned the garden city in its early years. The flowers are a magical pink in late winter, heralding the new season just around the corner!

Fagus sylvatica ‘Dawyck’
An upright form of Beech. Recommended by Hillier for the Parkway Close scheme as an alternative to the previously planted Lombardy Poplars. A longer-living species that offers the tall spire required in maturity for this iconic area of the town.

2. Parkway
The southern end had an avenue of 30x Horse Chestnuts in early maturity that had succumbed to ‘bleeding canker’ in the years running up to 2010. All needed to be felled and, eventually, replaced with an alternative.

3. Parkway Close
An area first planted in the 1920’s with a formal pattern of Norway Maples, Lombardy Poplars and Ornamental Cherries. One Maple had been lost, the Poplars had reached overmaturity and were beginning to decay – around 40% had been felled – and the Cherries were also overmature with some having been felled.

4. Fearnley Road
This classic residential road had retained its specimen Silver Birch trees at both entrances, but needed a new avenue of trees within the road, as over 50% of ornamental trees had been lost.

For this project, we needed to grow trees in large numbers. In addition, it was essential we were able to reserve trees from the same stock, e.g. Prunus sargentii, Liquidamber, for future call offs. The Welwyn team were able to select the trees they required during production and made annual visits thereafter to check on their progress. 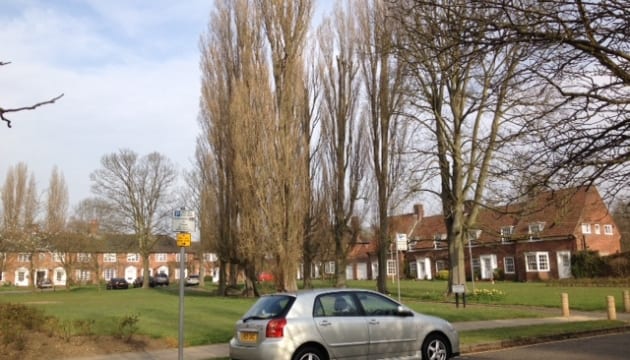 With this being such a long-term, strategic project, deliveries and planting have taken place in many stages over the years and are still ongoing.

2. Parkway
2010: Phase 1 – 5x Horse Chestnuts felled.
2013: Phase 2 – 8x Horse Chestnuts felled. In June, 13x Liquidamber styraciflua ‘Worplesdon’ were selected from our field tree nursery, with more
reserved to allow for future losses. The 13 were planted in winter.
2016: Phase 3 – 14x Horse Chestnuts felled. 14x Liquidamber trees planted that winter.
2018: Phase 4 – The final 3x Horse Chestnuts will be felled in summer and replanted in winter with the same 2013 Liquidamber stock held on our nursery.
3. Parkway Close
2016: In June, replacement trees were selected from our nurseries. In August, the entire close was felled. In winter, the felled Lombardy Poplars were
replaced with Fagus sylvatica ‘Dawyck’ (Fastigiate Purple Beech), the Norway Maples with Ulmus ‘New Horizon’ and the Cherries with another white-flowering variety.
Ongoing: Hillier have reserved the same cultivars and sizes of stock as selected in June 2016 to provide replacements in event of losses through natural causes or vandalism in future years.

We bespoke pruned a number of trees at the request of the client, leaving the clear stems lower than is our standard practice. This was possible to achieve because they engaged with us at an early stage, allowing us to grow and prune trees in this desired manner.

It is particularly rewarding to be involved in such an iconic tree planting project. It has been very successful to date, with Welwyn HBC able to secure future funding for the project as a result of the positive results of the first phases. Feedback on the newly planted trees has been very positive from both residents and local councillors.

The crucial elements in ensuring a successful outcome for this major strategic venture have been detailed project preparation and a continued focus on the core values of the project. 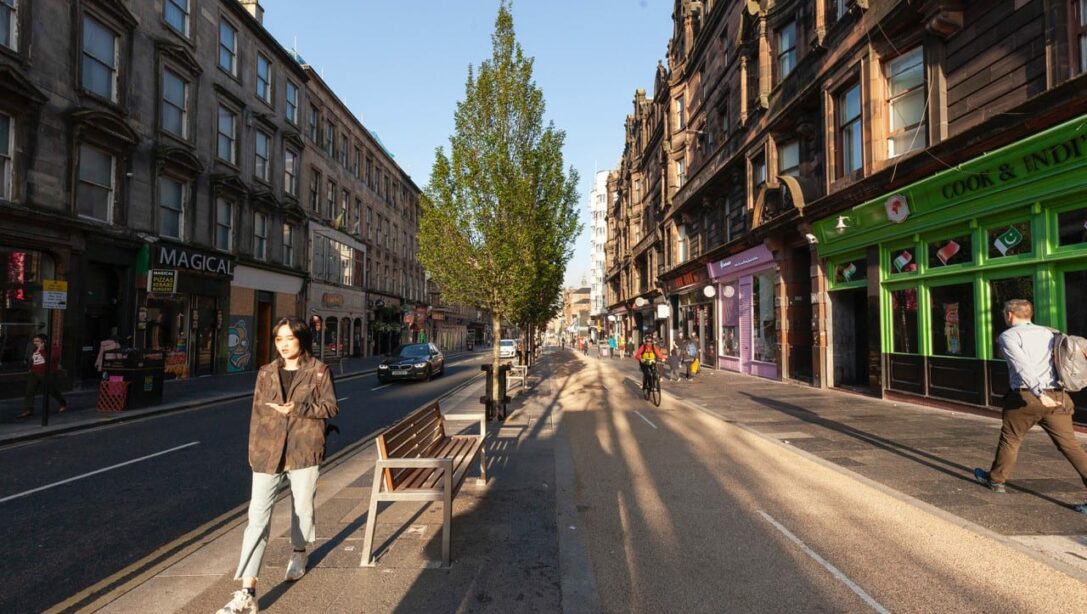 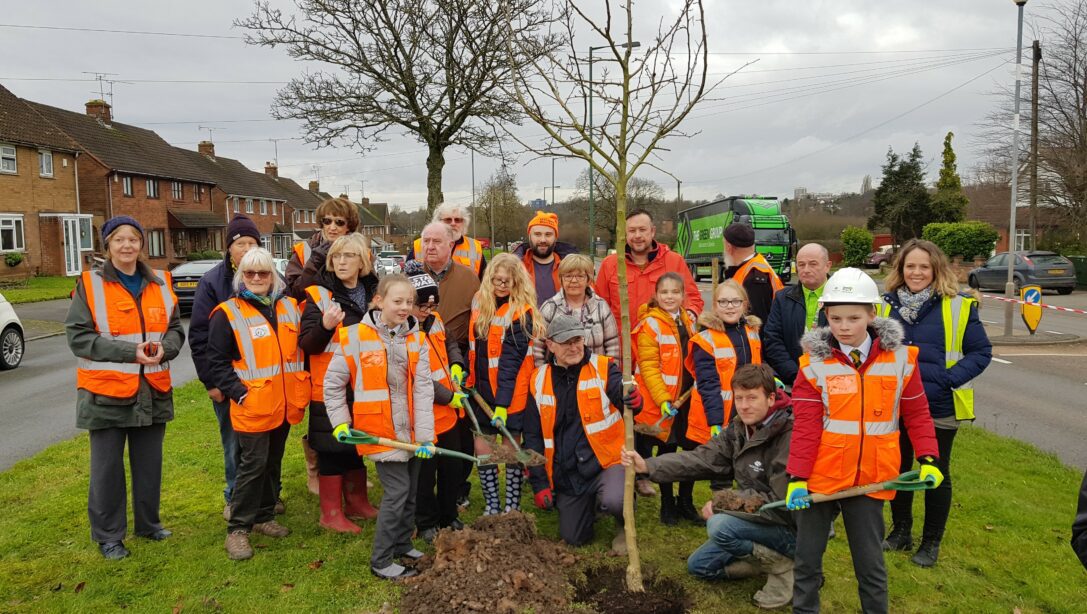